The NOAO Source Catalog (NSC) is a catalog of nearly all of the public imaging data in NOAO's archive. These images from telescopes in both hemispheres nearly cover the entire sky. While the large majority of these data were obtained for PI-led projects, only a fraction have been released to the community via well-calibrated and easily accessible catalogs. The NSC remedies this situation by creating a catalog of sources from most of the public data taken on CTIO-4m+DECam as well as KPNO-4m+Mosaic3 and some from the Bok-2.3+90Prime. The first NSC public data release (DR1) contains over 2.9 billion unique objects, 34 billion individual source measurements, covers ~30,000 square degrees of the sky, has depths of ~23rd magnitude in most broadband filters with ~1-2% photometry, and an astrometric accuracy of ~2 mas. The NSC will be useful for exploring stellar streams, dwarf satellite galaxies, as well as variable stars and other transients. Browse these pages to learn more about the NSC and how to access the data. The NSC DR1 overview paper (Nidever et al. 2018) describes the catalog in detail, including its the source extraction, calibration, combination, quality assurance, and science use cases.


NSC is meant to be a community release and make the data in the NOAO Archive holdings more readily available to scientific exploitation. There are several potential science use cases of the NSC catalog.


The figure below shows the density of the 2.9 billion objects in the NSC DR1 catalog covering ~30,000 square degrees. There are 34 billion measurements from 255 thousand exposures. Access and exploration tools include the Data Lab Data Discovery tool, database access to the catalog (via direct query or TAP service), an image cutout service, and a Jupyter notebook server with example notebooks for exploratory analysis. There are six NSC DR1 tables in the database:
NSC DR1 Object Density Map 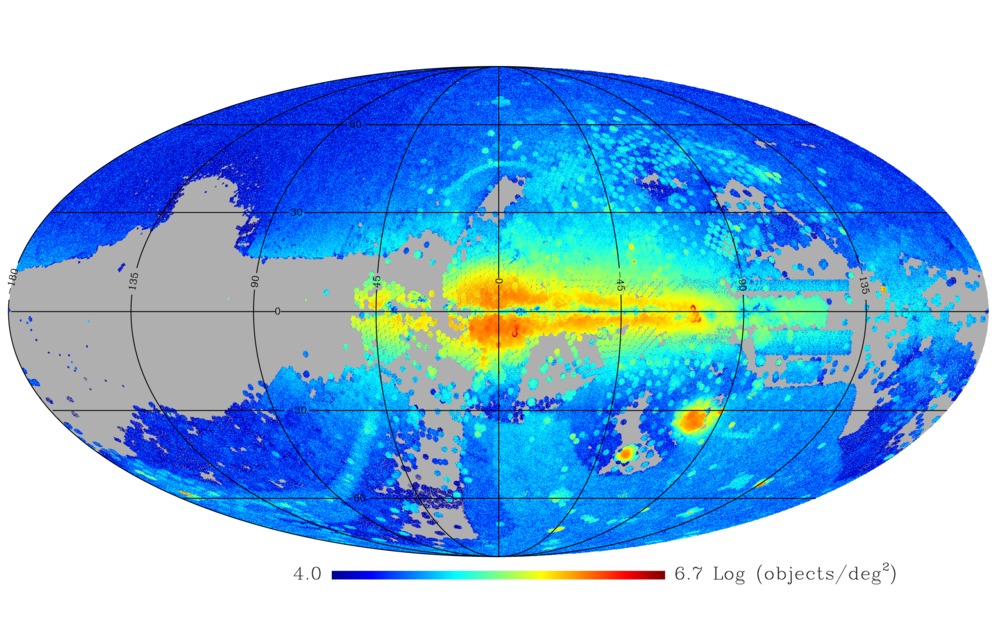 
The NSC data processing makes use of three separate software packages: (1) the Community Pipeline (CP) for instrument signature removal ( Valdes et al. 2014), (2) Source Extractor (Bertin & Arnouts 1996) for performing source extraction from the images, and (3) custom software (in python and IDL) to run SExtractor on the images and to perform calibration and combination.