The DECam Local Volume Exploration Survey (DELVE) combines archival DECam data with 126 nights of novel observations (PropID 2019A-0305) to study dwarf satellite galaxies over a wide range of luminosities and environments. DELVE is divided into three survey components (WIDE, MC, and DEEP), each of which have their own observational strategy and data reduction pipeline. By combining novel observations with existing data from DES, DECaLS, and other community programs, DELVE will provide complete contiguous DECam coverage of the entire high-Galactic-latitude southern sky. By the end of the survey, DELVE is expected to cover >17,000 deg2 to a depth of griz ~ 23.5 mag, ~2,200 deg2 around the Magellanic Clouds to a depth of gri ~ 24.5 mag, and ~135 deg2 around isolated Magellanic analogs in the Local Volume to a depth of gi ~ 25.5 mag. 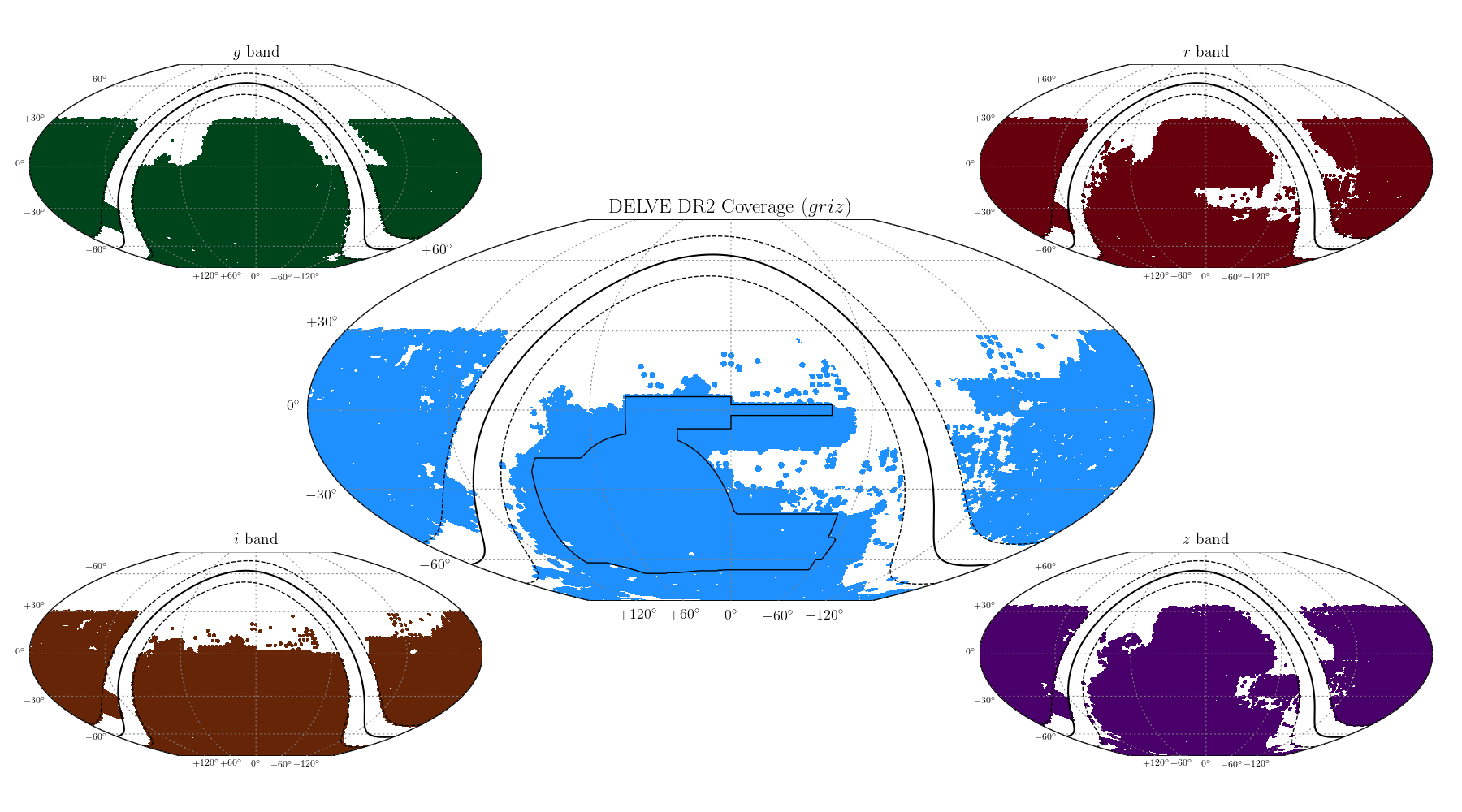 DELVE seeks to understand the faintest and most dark-matter-dominated galaxies in a range of environments. The DELVE data enable the detection and characterization of dwarf galaxies over a broad range of luminosity, from the ultra-faint satellites of the Milky Way (L ~ 103L⊙), to the Magellanic Clouds (L ~ 109−10L⊙), and analogs of the Magellanic Clouds in the Local Volume. DELVE consists of:

These three survey components will provide complementary insights into the abundance and properties of satellite galaxies around hosts at different mass scales and in a variety of environments. Combined with a unified theoretical framework, DELVE will explore the dependence of satellite properties on effects of reionization, host halo properties, and environment, offering essential insights into the galaxy–halo connection. More information about DELVE can be found at: https://delve-survey.github.io.

Each subcomponent of DELVE uses slightly different data reduction pipelines. While DELVE DR1 and DR2 come solely from the WIDE survey, we provide brief descriptions of each pipeline below. More detailed descriptions of the DELVE data processing can be found in Drlica-Wagner et al. (2021).

The second DELVE data release (DELVE DR2; Drlica-Wagner et al. 2022) is hosted at the Astro Data Lab and consists of catalog-level coadds in griz from the DELVE-WIDE processing. DELVE DR2 covers >20,000 deg2 in each individual band and ~17,000 deg2 in all bands simultaneously. The DELVE DR2 catalog contains ~2.5 billion unique objects, and ~618 million unique objects that were observed in all four bands.

The first DELVE data release (DELVE DR1; Drlica-Wagner et al. 2021) is hosted at the Astro Data Lab and consists of catalog-level coadds in griz from the DELVE-WIDE processing. DELVE DR1 covers >5,000 deg2 in each individual band and ~4,000 deg2 in all bands simultaneously. The DELVE DR1 catalog contains ~520 million unique objects.

Browse the Data Access page (side menu) to find out about different ways to use the DELVE DR1 catalog or obtain DELVE image cutouts.

The Astro Data Lab also includes several value-added data products that have been derived from the DELVE data. More details on these products can be found below.